The largest town in the west of Cyprus is Paphos. The overall impression of this port is dominated by the remains of old fortress in front of which the fishing boats roll in the light swell of the ocean. Behind the mediaeval ruins you are about to enter Paphos´ historic treasury. An archaeological excavation area bears witness to the importance of this town. Particularly the mosaics are still in an outstanding condition. The themes on the mosaics are mostly of mythological or divine nature. The religious views of the people of Western Cyprus was closely linked to those of the ancient Greeks.

25 kilometres south of Pafos there is the rock of Aphrodite, the place where according to mythology the goddess went ashore after after the sea gave birth to her. And close to Polis you find the Bath of Aphrodite, where Akamas found her and where the two of them hence set up their little love nest. Aphrodite´s lover was to become the eponym for the Akamas Peninsula, a large part of which consists of a nature reserve. The rocky peninsula is a true hiking paradise in close proximity to the sea. At times you are taken to breathtaking viewpoints, then shortly thereafter through narrow gorges which seem to lock out the sun permanently.

This landscape which reminds us of a tiger´s claw protruding into the azure ocean, is just so versatile. Here you also find the famous Turtle Beach. 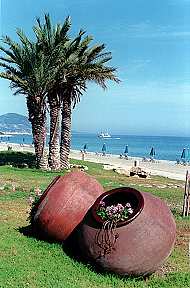