The highest elevation of the Provence boasting a white crown for the whole year has been a martyrdom for the cyclists of the Tour de France on many occasions. All through over the year cyclists train here and enjoy the wonderful view from the top to the highest peaks of the Alps, to the Pyrenees, to the sea near Marseille, to the Cevennes and much further.If the weather is nice, one has a view of almost a quarter of France´s total surface area. North of Mont Ventoux, towering up more than 1,900 metres with its peak, lies a still very untouched region of France. There are no masses of tourists pushing through the small villages and blocking the streets.

Long, long ago the Romans settled in this region, which the excavations in Vaison la Romaine give evidence about. They left their traces not only here but within the whole Rhône valley, for instance in the Roman theatre of Orange.Nevertheless, this region is not only made known by the ancient Romans and their legacy, but also by the excellent wine of the Ventoux region. To the south the Plateau de Vaucluse adjoins. Olive trees dominate the scene. Other agricultural products are cultivated here, too. Sisteron is the north-eastern gateway to the Provence. While the region north of it has a distinct Alpine character, the Provence is clearly Mediterranean.

In summer, when the lavender blooms, it seems as if the area is dipped in purple paint. The surroundings of Sisteron are rich in architectural treasures and lovely medieval villages. It is the ideal area for trips within the Haute Provence. 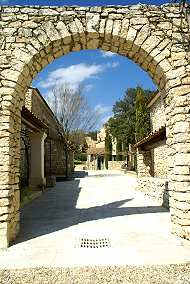