Set in the north-east of the Mediterranean Sea there is an island right on the seam between Europe and Asia and with Africa a bit further away. An isle which after Sicily and Sardinia is the third-largest in the Mediterranean. It is called Cyprus, a country that has been of immense strategic importance throughout the history of humankind. Cyprus looks back on a history of almost 10000 years. Since the first people settled here every important culture of the region has left its marks here. 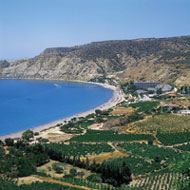 According to Greek mythology, Aphrodite rose from the ocean to go ashore on Cyprus, which gave her the name nickname "Island of Aphrodite". Many historic finds date back to the same time the myths were created in humankind´s head. The royal graves and mosaics in Paphos are world-famous. The many Byzantine churches with their beautiful frescos that bear testimony to the spirituality of the people, were built more recently. It seems that if you go ashore on this island produding sharply from the sea, you have much closer contact to the divine magnificence.

From a geographic angle, the multifarious island offers a suitable spot for everyone. Sunbathers are likely to have their needs satisfied almost throughout the year. Cyclists and hikers make increasingly use of the mild climate towards the beginning and the end of the year to indulge in their passion. Travellers that are more interested in culture will also find the visit more than just worth its while. However, the biggest luxury you are likely to encounter is the honest cheerfulness, coupled with the Mediterranean sangfroid which the local population spoils you with.